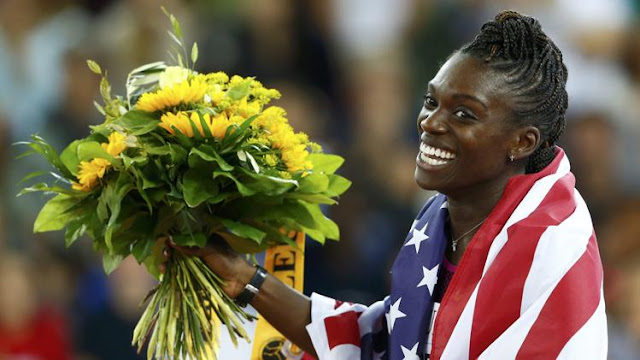 Professional Track Athlete Dawn Harper Nelson is a two-time Olympic medalist, winning the gold medal at the 2008 Olympics in Beijing, and the silver medal at the 2012 Olympics in London (12.54), in the women’s 100-meter hurdles.
The East St. Louis, Illinois native started her track career at East St. Louis High School, East St. Louis, Illinois, where she graduated from high school as a six-time, three each in 100-meter and 300-meter hurdles, Illinois High School State Champion, garnering the attention of UCLA‘s Track & Field Head Coach, Jeanette Bolden, who traveled from Los Angeles to St. Louis, MO to personally recruit her and offer a full athletics scholarship. She would attend UCLA, known for having one of the best programs for the 100-meter hurdles and launched the careers of six-time Olympic Medalist Jackie Joyner-Kersee and two-time Olympic Gold Medalist Gail Devers.
In 2014, Dawn Harper Nelson won her third consecutive IAAF Diamond League title and established the season’s world lead time (12.44). Harper Nelson enjoyed the honor of being one of two American athletes to be invited to participate in the IAAF Intercontinental Cup, an event that takes place every four years where continents compete against each other to determine the best of the best, in Marrakech, was bestowed on her, where she won and set a new championships record (12.47). She is currently ranked number one in the world going to 2015 for World Championships.
Two-Time Award Winning Multimedia Creative Dean Perretta gets to know the athlete more with an inspiring interview: 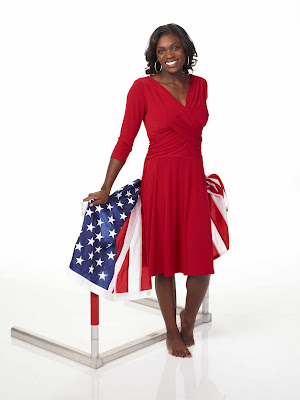 What keeps you highly motivated despite being officially ranked number one and the best in the world at what you do?
There are a number of things that keep me highly motivated to go out and give my all. First thing is, ‘I hate to lose’. I honestly enjoy going out on the track and leaving it all out there everytime I compete. One of the huge things about this year is I am actaully ranked number one. Since 2008, I have been consistently ranked number two in the world. Many of my years competing, I would lose my number one spot later in the year. I remember at a certain part of this year people saying ‘You know you’re ranked number one right now’. I would think; thanks for reminding me, added pressure. Also, there are still records I haven’t broken at certain track meets, and I feel I haven’t mastered my event. Even though I have been running this long, there are new things my coach told me that I now feel I can grasp. The hurdles are a complicated world, and I love it.
In 2014, you claimed your third IAAF Diamond League championship. Where does this accolade rank in your distinguished career?
For me the third Diamond League trophy is very special because it speaks consistency and fight. It’s hard to be consistent in the hurdles because you literally have so many obstacles in your way meaning more chances to mess up. Let’s not forget the fierce competition. One thing about us 100-meter hurdlers is that we don’t shy away from each other. There’s a battle at least seven times a year for this title. Within those seven races, I think I made my fair share of mistakes, but I didn’t give up, always fighting to the end. That’s what I mean by fight.
You have won an Olympic Gold medal (Beijing 2008) and a Silver medal (London 2012). How often have you been thinking ahead to Rio de Janeiro 2016?
I think of Rio de Janeiro (2016) often, but I won’t stress over it. I don’t want to miss out on the journey of getting there. If I put too much emphasis on it now, I will be drained by the big day. My coach and I have a plan in place, and if we stick to it in the next couple of years, God willing, I’ll be ready to compete at my highest level. Perfect timing for Rio! 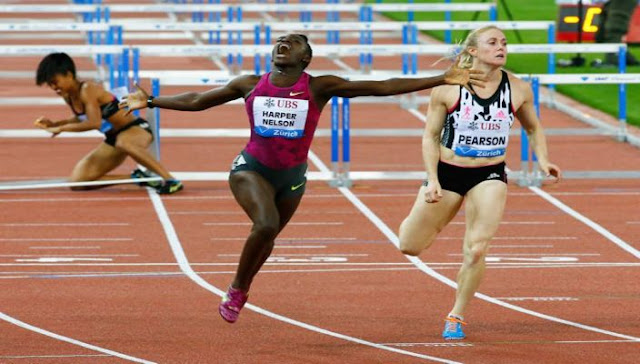 At UCLA, you were an NCAA All-American. What did you study during your athletic scholarship?
I studied Psychology at UCLA. I came into college not sure, but I took one class and was hooked. I loved figuring out why we do what we do and how we cope in handling life. Now I want to get my masters in Sports Psychology.
Music provides preparational motivation for professional athletes prior to competition. Which song is heavily rotating on your current playlist?Many times at competition I don’t  listen to music because I like to listen to my own thoughts. I like to be aware of what is about to take place; GAME TIME! The times I do listen to music while competing I listen to “Fancy” (Iggy Azalea), “Feelin Myself” (Will I AM) edited version, “Headlines” (Drake) edited version, “No Gray” (Johnathan McReynolds), “God In Me” (Mary Mary). I find myself dancing whenever I listen to music, and I don’t think that’s where my energy needs to go at that time, especially with a good beat; dancing is involuntarily.
What did it mean to you personally when former Illinois Governor Rod R. Blagojevich declared October 6 ‘Dawn Harper Day’?
When I was honored with “Dawn Harper Day”, I was speechless. It was honestly a dream I didn’t realize had come true. It’s so special to me. I often sit back and think about how immense it is.
As a respected Nike endorsed professional athlete, how beneficial has this been financially for you?Being sponsored by Nike has completely changed my life. I was determined to work towards my dream and do whatever it took meaning working three jobs and living in a frat house that was converted into apartment living. Funny thing is I often thought about how neat it would be to have Nike send me gear and actually be paying ME. I’ll never forget when I signed on the dotted line. It meant that I could then go to track practice and only focus on what I needed to do to get faster and look good doing it. The other blessing that came from the Nike sponsorship is that I could go home and see family when I needed a refresher. Anyone that knows me, knows I absolutely love family time.
Do you believe that you will set a brand new PB given the fact you are in the prime of your career?I absolutely, positively believe I can set a personal best in the upcoming years. I have really learned what works for my body to prevent injuries. I have had to overcome many of those in my career.  Also, I am now beginning to conquer “my hurdles”, my nickname for them. I’ve learned how to apply much of what I have been taught over the years from my coach. All this to say, I am excited to continue competing at an elite level, personal best’s galore!
Can you explain your initiative with the American Diabetes Association?
I was drawn to the American Diabetes Association (ADA) because diabetes is something that has definitely affected my family. Three of my Grandparents and aunt has diabetes. It was actually the cause of one of my grandparent’s death. In my upbringing, it was always taught to eat healthy to try and prevent health issues. That’s what I think I have in common with ADA is to bring awareness and discussing preventive measures.
Let’s touch on IAAF World Championships Beijing 2015. Will history repeat itself when you compete on the grandest stage of them all in China?
I fall asleep hoping that history repeats itself in Beijing. It’s going to take hard work and consistent believing. I say that Beijing is like my second home, because that’s where it all started for me. Whenever I think back to Beijing, it brings tears to my eyes. A place that is dear to my heart.
What can visitors expect when they enter your brand new official website?My new website provides a connection to me. I have a section where I post thoughts about my life on and off the track. Of course there are updates of where I am and what I’m doing, pictures and also another way to get in touch with me. If you want to know things about my career, where I’m from, family, etc, it’s all there.
Dawn Harper Nelson Official Website: www.dawnharpernelson.com
Dawn Harper Nelson Official Twitter: @DHarp100mH
Dawn Harper Nelson Official Facebook: www.facebook.com/dawnharpernelson
Dawn Harper Nelson Official Instagram: www.instagram.com/DHarp100mH
Article & Interview by: Dean PerrettaTwo-time Award-winning Multimedia Creative
Twitter: @DeanPerretta
- 19:01