In-spire LS Magazine were an official media partner for the phenomenal beauty pageant Miss USSR in 2017 and having competed in a number of pageants herself, Founder of In-Spire LS Magazine Sasha Shantel went down to the event personally to check it out and to provide this amazing review for our readers here at She Inspired Her. Sasha said that she felt that "it would be a great opportunity to provide coverage and importantly, to highlight the positive aspects of the pageant scene"
Event Review by Sasha Shantel

Many people deem these form of competitions (pageants) as being a negative representation of women, as they are being celebrated only for their beauty. However, over the years these competitions have acted as a positive platform where talented women have the opportunity to speak on freely on causes they feel passionate about, demonstrate their individual talents and at the same time show of their unique beauty; all while representing their country.

The event was a glitzy affair with the biggest and brightest talents from post-soviet union turning out to walk the red carpet and be apart of the one and only international beauty contest dedicated to the beautiful women from 15 post-USSR countries competing in the UK.
The event was celebrating its fifth year and this was a major cause for celebration. The atmosphere was electric from the outset and the Troxy played host to three fun filled hours jam-packed with music, celebrity appearances and entertainment galore.
It was a great experience to immerse myself in the cultural backgrounds of the numerous participants. They were a positive representation of their countries with most of the participants being current students at university or recent graduates and many being able to play intricate instruments and speak multiple languages.

I found myself working through the crowd trying to name as many of Russia’s highest net worth individuals and entertainment personalities. It was refreshing the sheer excitement of all involved. The beginning segments was a whirlwind with appearances from none other than international female DJ Sonique; who appeared in a pre-show press conference. It was a fantastic experience to witness the star in the flesh and it was pleasing to learn that after her smash No.1 hit ‘Feels So Good’, she had continued her position as being one of the most sort after female DJ’s on the international circuit. She teased the crowd with her latest single and then further excited the crowd with a live rendition of her smash hit.

The dresses worn by the ladies were amazing but it was their swimsuits that really got the crowd talking! Designer Maria-Pogrebnyak-Shatalova shared her sexy but classy swimsuits which perfectly complimented the figures of each participant.
Like with any major event, there were a few hiccups including one of the presenters reading the wrong names and the event starting a little later than expected. However, this did by no means dampen the evening.
Although it wasn’t an easy feat; the judges were able to choose Anastasia Stussy as their winner. With a finance degree under her belt, Anastasia can also speak 5 languages and is an international model and was a worthy winner. 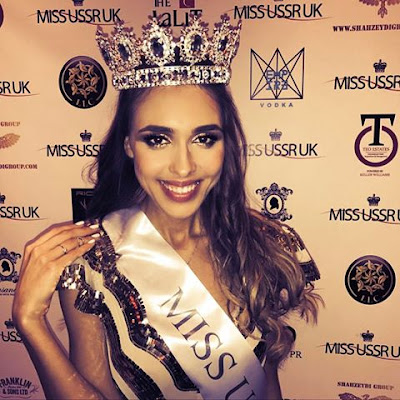