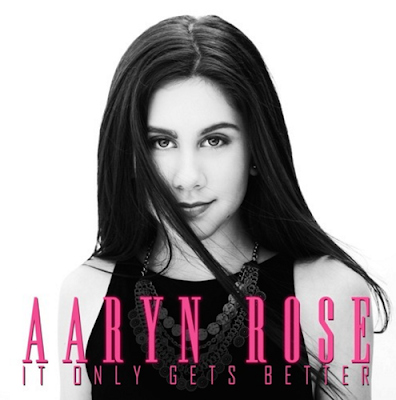 At only 12, you might recognise Aaryn Rose from being featured in John Legend's hit music video "You and I", which has amassed over 57 million hits on YouTube.


Already an accomplished vocalist, multi-instrumentalist, Aaryn Rose has performed around the Los Angeles area in famed venues such as Lucy's 51, The Mint, The Joint, The Queen Mary, The Normandie Casino, Bar 20 on Sunset, just to name a few. She had performed with local charity Nu Skool Sings Old Skool, that raised money for the women of Skid Row.


Aaryn Rose has also performed with bands at Guitar Center Studios and was featured live on Fox 11 News as an up and coming star. She was already a featured performer on Oprah's "Where Are They Now" segment.

Q: First and foremost, “It Only Gets Better” which was produced by GRAMMY Award-winning producer Jared Lee Gosselin is your brand new single. What separates this incredible record from the songs that you have released previously?

A: What separates "It Only Gets Better" from all my other original songs is that Jared has a better understanding of today's current beats and sound. He is extremely creative and he is not afraid to go out of the box.


Q: On your ever-growing resume, being spotlighted on Fox 11 News in Los Angeles and performing on Oprah’s “Where Are They Now?”segment are definitive career highlights thus far. Does is it all ever feel surreal to you?

A: I have been extremely fortunate to have worked with amazing people thus far. What I am coming to understand is that every experience is a bit surreal. One time while recently recording we struck up a conversation with a young woman who happened to be at the studio with Michael Buble. She brought him in to meet us and he ended up chatting for 20 minutes. He said he hopes he can open for me one day. That was amazing.


Q:  Having made a guest appearance in John Legend’s “You And I” music video, how much in hindsight do you feel this appearance helped you as a recording artist?

A: I was hired to act in this video. The fact that I was chosen for this amazing project was surreal. "You And I" is a very empowering message to girls and women of all ages.


Q: Most recently, you went into the studio with Lil Mama. How did this collaboration come to fruition?

A: We met through Jared. We have not yet worked together. She is an amazing woman with such great insight. She gave me so much valuable information to help me on my musical journey.


Q: Can you explain to the fans at home about the brand new Aaryn Rose Merchandise?

A: This is our first attempt at merchandise. I would love to expand into other garments - hats, jewellery and natural make-up.


Q: Being compared in the media to Adele, Lorde and Amy Winehouse are certainly huge compliments as much as even huger expectations. However, would you rather be the next Aaryn Rose with all due respect to the aforementioned artists?

A: I would rather be the next Aaryn Rose. I am comparable to the artists mentioned and I take that as an enormous compliment. I love them all for their talent and ability to be themselves but we are all very different in the messages of our music. I have performed covers of all of these talented women and I have enjoyed singing their songs.


Q: Who do you cite as your musical influences?

A: I admire Rihanna for her strong voice and the musicality of her songs. I look up to Ariana Grande because most of the time her songs are not dark. Her voice is amazing. Her music is fun, lively and upbeat.


Q: “Everywhere I Go” lyrically details your experiences on being relentlessly bullied in school. How much of an emotional and creative outlet was it to inspire others via this record?

A: I wrote that song when I was 8. At the time I felt so bad that this one particular girl was making my life miserable. It all just came to me and I am so happy that it did. I have received messages from girls telling me that it really helped them get through a tough time in their life. Inspiring others is very important as growing up is not so easy.


Q: How was your experience in raising money for women of Skid Row courtesy of performing live at Nu Skool Sings Old Skool?

A: I performed with the group for a couple of years. We always had to chose songs that were over 20 years old. It really helped me learn some of the classics. My family would always donate to the different charities. We would buy the kids school supplies, donate Easter baskets, have concerts and even donate musical instruments to inspire the kids.


Q: Having performed around the Los Angeles area in revered venues such as Lucy’s 51, The Mint, The Joint, The Queen Mary, The Normandie Casino and Bar 20 on Sunset. Which live show has stood out most for you?

A: They have all been amazing in their own way. The venues are legendary. I just recently had an opportunity to perform at The Roxy. There are a couple that stand out, The Queen Mary was with a live band. All of those musicians were legends coming together for this performance. I recently performed at The Miss Russia Pageant 2016 and that was amazing. It was a beautiful venue with a great stage and the audience was great.


Q: What has been the biggest obstacle for you as a recording artist?

A: The toughest thing for me has been my age.  People tend to underestimate my skills because I am only 12. I have been writing since I was 8 and I am learning 3 instruments - piano, guitar and drums. I know that I am only 12, but I feel that this is what I was born to do.


Q: Before we leave, do you have any upcoming live shows and creative projects that you have lined up in the pipeline?


Aaryn Rose - "It Only Gets Better"
(Listen): https://soundcloud.com/aarynrosemusic/it-only-gets-better