Be Inspired: Demi Lovato - The Voice of the Voiceless #BeInspired #MentalHealth 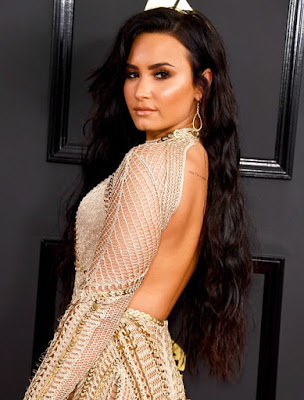 "Confident" Pop superstar Demi Lovato has undoubtedly achieved an unprecedented and distinct level of international success in contrast to the average 24 year old throughout her well-documented life and career.

However, there is indeed nothing ordinary about the inspirational New Mexico-born megastar when it comes to inspiring others, rather something deep down inside her heart which is very much extraordinary.

The inspirational multi-platinum selling singer-songwriter, Hollywood actress and activist - who officially made her entertainment debut at 8 - has significantly grown in leaps and bounds both personally and professionally, whilst exhibiting conventional wisdom and innate mental strength beyond her own years given the endless series of adversity which she has faced and weathered along the way in life.

"Getting a diagnosis was kind of a relief. It helped me start to make sense of the harmful things I was doing to cope with what I was experiencing.

Now I had no choice but to move forward and learn how to live with it, so I worked with my health care professional and tried different treatment plans until I found what works for me.

Living well with bipolar disorder is possible, but it takes patience, it takes work and it is an ongoing process. The reality is that you’re not a car that goes into a shop and gets fixed right away. Everyone’s process and treatment plan may be different.

I am so grateful for my life today and I want to protect it. It isn’t always easy to take positive steps each day, but I know I have to in order to stay healthy.

If you are struggling today with a mental health condition, you may not be able to see it as clearly right away but please don’t give up – things can get better.

You are worthy of more and there are people who can help. Asking for help is a sign of strength." - Lovato told Be Vocal

Lovato's millions of die-hard fans worldwide have witnessed a proverbial voice of the voiceless beyond the impressive vocal dexterity and have additionally found solace in a very humble and loving woman who shares their daily struggle with bipolar disorder.

Incidentally, Demi Lovato was routinely bullied as a child and later experienced well-documented substance abuse and eating disorders; Lovato has also been a public advocate in protecting children who are vulnerable and is also a huge supporter of the LGBT community. It is Lovato's deep compassion and big heart which separates her from her contemporaries in entertainment and she has used her global brand to bring mental health awareness to those uneducated on the subject matter.

Mainstream media has seemingly had a penchant for incessantly reporting on irrelevant news which doesn't truly matter and Demi Lovato's intense personal battles, particularly with bipolar disorder have truly shown that she is not weak. Lovato has resiliently risen above each time and thoroughly inspired others around the world to show that bipolar disorder and mental health complications cannot defeat the woman or man standing in front of the mirror.

Demi Lovato undoubtedly embraces her role as a positive and inspiring role model for millions of young girls around the world and to those who have come to identify with the pop superstar courtesy of both suffering from and championing mental health.

Unmistakably, Demi Lovato has become the voice of the voiceless and the silence and stigma surrounding mental health begins to vanquish with time.